In Mozilla, we use the the Mercurial version control system (Hg) to manage our source code and localizations. Mercurial allows localizers to work locally (on their machines) and then push (an Hg term) changes to a remote repository, which usually is hosted on the Mozilla servers (hg.mozilla.org). Localizing current versions of Firefox, Thunderbird and SeaMonkey includes working with Mercurial. If the documentation is incomplete or you have questions, please drop by the #l10n or #hg channels on irc.mozilla.org. The Mercurial FAQ are also worth a read, should you run into trouble.

Follow the instructions below to install Mercurial on your system. Once you've installed Mercurial, we'll walk through the steps to configure it.

You can easily install Mercurial from the command line by issuing one of the following commands. Choose the appropriate command for your distribution and make sure to run as root.

If you prefer a graphical interface, you can download and install MercurialEclipse here.

Open a Terminal window and enter hg --version. If you see a message about the version of Mercurial (e.g. Mercurial Distributed SCM (version 1.3.1)), you have installed Mercurial successfully!

For more details on installing Hg on Linux systems, refer to the instructions on Mercurial's Download page.

With Windows, you have a couple of install options: 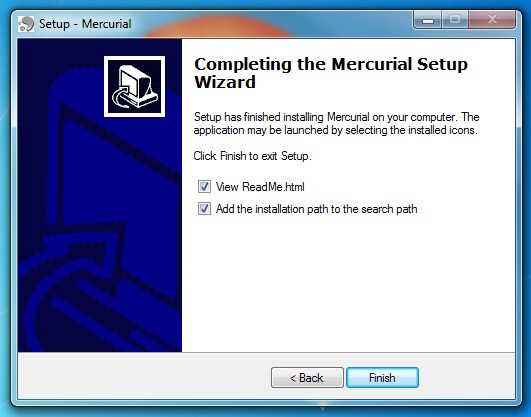 Part of the command line Hg install for Windows involves making sure the hg executable is in the system's %PATH% variable (TortoiseHg doesn't need this step). Use the add_path.exe utility found in C:\mozilla-build\hg to do this.

Note the dot (".") at the end of the second command, which means the current directory. If the utility modified your %PATH% successfully, a dialog will open saying, "%PATH% has been updated correctly."

Alternatively, you can edit the %PATH% variable manually. In order to do so, right-click on your computer icon, choose Properties > Advanced > Environmental Variables, select PATH and click Edit. If you don't see PATH among the options, you'll have to click Add and edit it within the Add dialog. See the screenshot for an example.

For more details on installing Hg on Windows, refer to the instructions on Mercurial's Download page.

Installing Hg on Mac OSX is super easy. You can install Mercurial via MacPorts through the Terminal, like so:

You can also install it by downloading the dmg package from the Hg download page. It has an install dialog that will walk you through the process.

If you prefer a graphical interface, you can download and install MercurialEclipse here.

Open a Terminal window and type hg --version. If you see a message about the version of Mercurial (e.g. Mercurial Distributed SCM (version 1.3.1)), you have installed Mercurial successfully!

For more details on installing Hg on Mac OSX, refer to the instructions on Mercurial's Download page.

Once you've installed Mercurial, you'll need to configure it before you can use it successfully.

Your Mercurial configuration is contained within a config file which you must create yourself. Your config file is called either ~/.hgrc (UNIX systems) or Mercurial.ini (Windows), depending on your operating system.

Your config file should have the following settings:

Now that you've installed and configured Mercurial, here are a few tasks you can do without Hg commit access priviledges.

There are a couple of repostiories that contain en-US source files that most locales will want to deal with.

Here's how to get (or clone) your en-US source files for the first time:

This will both get new changesets from mozilla-aurora and apply those changes in your working copy.

This will both get new changesets from comm-aurora, mozilla-aurora and the other appropriate locations and apply those changes in your working copy.

Another thing you can do with Hg without needing account priviledges is creating L10n patches of your work for someone else to commit to your remote L10n repo on the Mozilla servers. Doing this ensures that your dashboards are always accurate, as they look at your remote repo.

Here's how to create a L10n patch with Hg and the Mq extension:

Please refer to MqTutorial and Mq documentation for further uses of Mq extension to manage patches.

Eventually, you or your team leader will need Hg account priviledges. Let's face it, it's just more convenient to commit and push your work to the remote repo yourself, rather than creating patches and asking someone else to push them for you.

To get write access to the l10n hg repositories on the Mozilla server, there's a bit of paper work to be done. The localization team owner needs to file a bug requesting an hg account. This bug will request level 1 L10n priviledges. You need to follow the instructions regarding the contributor form. Write access to the hg repositories requires a ''voucher'', which, for the owner, will be done based on the review by Mozilla. For peers of a localization, the owner can vouch (once she or he is registered).

Now that you have Hg account privileges, you can send your work to Mozilla all by yourself. Here are the steps to send your L10n work using Mercurial:

And tah dah! You're done! Congratulations on finishing the tutorial. Take a break and grab a snack, you deserve it!